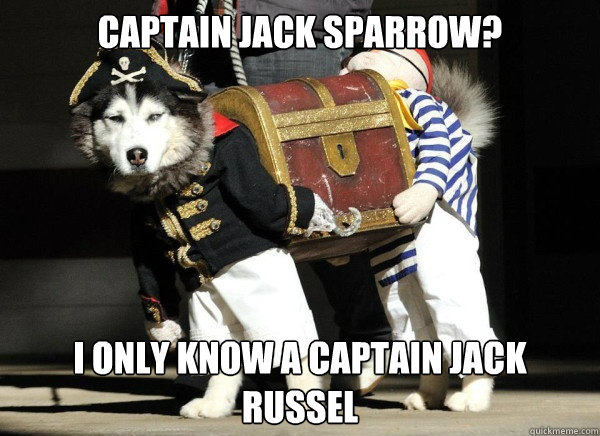 Pirating has gone to the dogs…and whatever other animal you can convince to wear a pirate costume. But this isn’t where the real Sea Dogs came from, you can thank Queen Elizabeth I for those.

Pirate Lore of the Sea Dogs

Once again we visit the Free Encyclopedia which offers up this true tale of pirates of the Caribbean:

The Sea Dogs were essentially a military branch that were authorized by the Queen to attack the Spanish fleet and loot their ships in order to bring back riches and treasure. The Sea Dogs were able to do this because they carried “Letters of Marque“[2] which made their plundering of Spanish ships legal despite the countries not officially being at war with one another… By having a small fleet of ships that would sail around and pick off Spanish ships, risking their lives and own ships in the process, they were able to reduce the funds and size of the Spanish navy significantly. The Sea Dogs continued carrying out raids against the Spanish until 1604 when England and Spain made peace. After that, many of the Sea Dogs left England to continue pillaging off either the Barbary Coast or in the Caribbean.

Navy Lore of the Sea Dogs

But those weren’t the last Sea Dogs. In fact, the U.S. Navy is known for having dogs on board to build morale of the crew. Many ships had their mascots. It’s a tradition that has been maintained in the Coast Guard and Marines also. Dogs of all kinds have been kept and puppies have been born on board as well. My cold pirate heart was warmed with this tale about a dog that was adopted by the Coast Guard back in 1944:

“‘Smokey,’ the only living creature Coast Guardsman found aboard a tanker that burned following a collision with a sister ship off the Florida coast several months ago, has been promoted by her guardians, crew members of a Coast Guard fire boat at Port Everglades, Fla., to “Bones’ Mates, Second Class”, and issued an official identification card giving her occupation as “expert eater”. The card is signed with Smokey’s “X” (crossed bones) and is paw-printed. Eighty-eight lives were lost in the collision of the two tankers and ensuing fire,” 1944

You can find a picture Smokey’s ID card on the U.S. Naval Institute website. And there are many other engaging photos of sea dogs for an animal lover like myself to enjoy. It’s worth looking into.

Of course if what you want is to see dogs in costumes, you should come and see us at the Minnesota Renaissance Festival this weekend. September 17 & 18 for Pet Fest.